Today while I was watching the morning news on TV I heard "à medida que". So I tried to think of how to say that in English. It's a good exercise to try to translate things when you're learning a new language. Anyway, as easy as it might be, I couldn't come up with any ideas.
But, thanks to the Internet and with a quick look I had the answer.
It's very simple in English, in fact it is just a two-letter word: AS.
That's it. In Portuguese: À MEDIDA QUE turns AS in English.

Here are some examples:

As the election gets closer, the number of undecided begins to drop. (À medida que as eleições se aproximam, o número de indecisos começa a cair.)

Now what about writing your own examples in order to practice it? 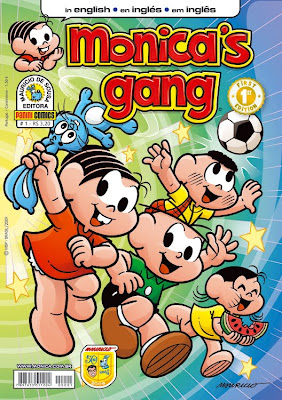 Today I'd like to talk about "Revistinha da Mônica" in English. Monica's gang is really great to learn English vocabulary. The best way to do that is through reading. It'll be much easier to remember words and their meanings when you come across them again. So why not have fun while learning?

That's exactly what's going to happen.You'll find lots of messages of friendship, good values and ethics in a cheerful and spontaneous way.

You can buy Monica's gang at any newsstand next to you or even read it online.

The story tell us about Pitheco and his family, a primitive one. He started to think that sitting on the floor to have their food was not that cool, so he decided to invent the table and the chairs. Then he told his wife Tooga to have a seat. That's why she thinks he's a chivalry, a gentleman.

You see, probably I won't forget this word. I hope so. :D

A little bit about me

English - It's now or never